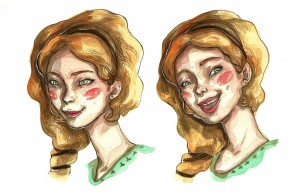 Never in my wildest dreams I expected to have fanart made for my character. OC, original character, as they are called in the mysterious world of Tumblr, fanfiction and fandoms. It is not just me being sincerely modest. I am indeed sincere by the way. It is flattering and validating. And humbling. But about the responsibility I feel as a writer – a bit later.

Mostly I was astounded by the email from a wonderful professional illustrator with their friendly, almost off-hand offer, because I write fanfiction. Well, wrote fanfiction. My first book is already available for pre-order on Amazon, but it is quite a different story, since Convince Me the Winter is Over is contemporary fiction, dealing with psychological healing and PTSD, and not exactly the light stuff I write on https://www.fanfiction.net/u/4633889/. No travelling across Misty Mountains and enamoured Dwarven Kings.

With Winter I decided it was worth trying to publish it because it seemed to have made difference. Because readers would contact me and tell me that it made them feel better, or start therapy, to accept that there is nothing wrong with them, to consider seeking help, and most importantly, to stop blaming themselves.

And after the email from the talented Selma I once again questioned what I am doing as a writer. If some of my fanfiction stories spark creativity, does it mean I have underestimated the impact they make?

On the side note, reviews that people leave under each new chapter of my current story Me Without You are a social commentary much more fascinating than my writing. People unhappy with feminist ideas my redhead lives by, her resistance to the role of a wife and a ‘good woman,’ her refusal to give up her life for being with a man, whom some readers go as far as to call “too good for her then.”

If a person felt like spending some of the time they could dedicate to their professional activity, sharing their creativity and their efforts with others, to consider the face of the girl who has been my protagonist since day one, if Wren of Enedwaith is now travelling through other media and other platforms, does it mean I have to be even more persistent and more careful in delegating the ideas I believe are beneficial for others to read about?