Update, update, it’s time for an update on what Katya’s doing 🙂 (Clearly some writers/artists here have had a wee bit too much chocolate. But seriously, chocolate affects me like booze does normal people, while booze just knocks me out 😀 And there was this box of Lindt elves; and they were glossy and plump; and pretty foil wraps fell off; and one followed another… 😛 )

It’s been edited; the cover is made; and it’s ready to go, but… I’ve been thinking that it’s holiday time now, and we all have families to visit and eggnog to drink. And judging by how it goes on FF and A03 sites, most people are not very active online around this time. So, how about we do the whole voting + getting a free copy if the story wins (and Katya gets a bit cash, and doesn’t have to get a soul-crushing, boring job for a bit longer) in January?

Let me know what you think! 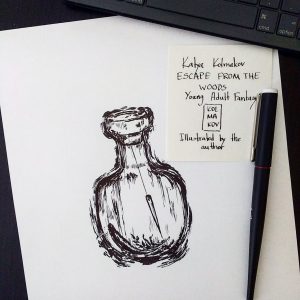 It’s written! I’m serious! 😀 I wrote a novel in exactly a month! I started November 7th, and was done December 8th. I would have finished December 7th (not intentionally at all), but I was writing the final battle scene, and then my alarm went off, and I had to go pick up my son from school! I am almost certain that people on the bus thought I was mad! I was buzzing, and mumbling, and twitching 🙂 But then the next day I finished it!

I like it. That’s all I can say. I do have couple degrees in literary studies, so I have all these critical urges from time to time – but it just flew from under my fingers, and I love it. Those of you who have warm and fuzzy feelings towards Thorin/John (which I assume are all of you 😀 ) will enjoy a certain character in this story for sure.

I even decided to try to go with the traditional publishing, and am currently looking into publishing houses, and agents. Does any of you happen to know anyone in that terrifying, cut throat business? 🙂

In the picture above, you can see a magical compass, fuelled by a person’s blood, which allows one to search for a hidden relative, or object – and the book will actually explain how to build one. Have I gotten your attention? 🙂

Fanfiction, of course! On fanfiction.net and Archive of Our Own. Now that my mad writing spree is over, I’ll dedicate more time to my FF.

I’ve also been recently reminded that I have a Wattpad page. I’ll clean it up and post some old Thorin stories there, and…

A new idea! (Clearly, those chocolate elves should’ve stayed where they were!) How about a romance story on Wattpad, where a lovely chick whose job is to be a muse (she’s a personal coach for creative peeps) is torn between two blokes? One is tall, dark, and blue-eyed (we all know the type, don’t we? 😉 ), and another one is sort of “Bilbo meets John Watson?” (They do kind of look alike, don’t they? 😀 ) The plot is already formed in my head, and ooooohhhh, the delicious angst! 😀

Also, I’m finishing the next chapter for the Agatha Christie style story for my Patreon supporters. They will also get some exclusive scoop into the freshly finished novel; character designs; and Christmas watercolour cards by yours truly.

There is also a story for Etsy that is slowly taking shape. I’m still working on choosing a character design style, and the overall plot, but as promised a whodunit with Gwen (yet another version of Wren); and both John/Thorin and Einar is on the way! Once I’ve set my mind on the overall style, it’ll be a go – and I hope you enjoy it!

Writing aside, I’m also working on my art, including a family portrait commission, which is equally daunting and exciting 🙂 There is also polymer clay; dry pastels; the birds of Manitoba that I want to draw… and who needs sleep anyway? 🙂

Oh, and of course, there is suspicious new character in my Dr T Series 🙂 Did you like Eva? 😉

Thank you for your interest, my duckies! There is no writer without readers!