I decided it was a good idea to write on my blog more often, just to keep you posted regarding what’s going on, and more so, to get some feedback from you, my duckies!

So, there are two ideas that I’m nursing these days (besides the usual lot of FF, AO3, and JukePop writing; Stop, Hammer Time! editing for Amazon Kindle; the Etsy shop; and (for some inconceivable reason) my sudden interest in the birds of Manitoba.) 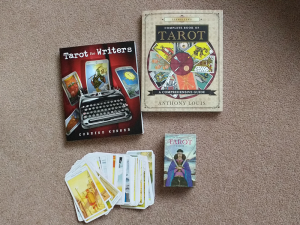 Some time ago I wandered in our local occult/New Age shop. It’s not exactly my cup of tea, but I do have broad interests 😉 I chatted with the owner about my art and such, and that I was considering drawing a deck of Taro cards. It was just a vague thought at the time, but it sprouted when she bestowed me with the deck that had previously belonged to our main Taro reader in the city. The reader had given it up for ‘adoption,’ and the lovely lady in Radiance Gifts shop thought I was the perfect candidate 🙂

So, now, armed with couple books and keen interest, I decided to venture into drawing a deck. I’ll keep you posted. I’ll be posting designs on my Instagram (check it out for birds of Manitoba as well, if it tickles your pickle 😉 ) and I’m considering later selling the deck on my Etsy.

Idea #2: A modern fantasy story based on Russian folklore

This one has been brewing in my brain for quite a while. There are all those fascinating characters from my childhood – Koshey Bessmertny (Deathless), and Baba Yaga, and Vassilisa the Wise – and I always wanted to write them, and the dark and thrilling and mesmerising stories I listened to as a kid; but I also wanted to give them a twist.

It is something that is done a lot these days (see Percy Jackson, and hundreds of other stories of the same sort); and I even heard that there is a fantasy novel about a girl in the States (maybe, Canada) fighting Slavic monsters. I will of course have to do my research. I’d hate to be unoriginal!

Also, I’m not sure about the format of it. Should it be a novel? Should it be a webserial – on JukePop, or this blog? Or should I sell it by a chapter on Etsy as I’m planning to do with the whodunit?

Altogether, the things I do know for now:

1. The main characters are:

Yana Krapiva, Mira’s mom, a Russian immigrant to Canada; a baker in a local organic bakery;

John Bessemer, going by nickname Kosh, a mysterious man from Yana’s past;

Escape From the Woods || Sample Chapter

All of it very is much approximate! Feedback is highly appreciated!

Here are the first drafts of two characters’s appearance: 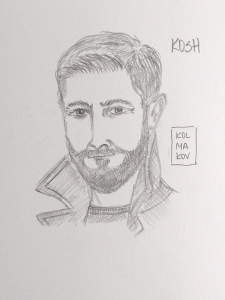 Please, let me know what you think!